FROM WASHINGTON, DC
Our Mission:
To connect the American people to their Army by telling the Army story and honoring our Soldiers and Veterans at home and abroad as the Musical Ambassadors of the Army.

This year, The U.S. Army Field Band celebrates its 75th anniversary. Founded on March 21, 1946, General Jacob Devers commissioned Chief Chester E. Whiting to “organize a band that will carry into the grassroots of our country the story of our magnificent Army, its glorious traditions and achievements.” 75 years later, The United States Army Field Band continues to connect America to its Army by telling the Army story and honoring our Soldiers and Veterans as the Musical Ambassadors of the Army.

Explore our roots and follow our calendar as we pave the way ahead with energetic and engaging music to represent your U.S. Army and connect it with Americans around the world. 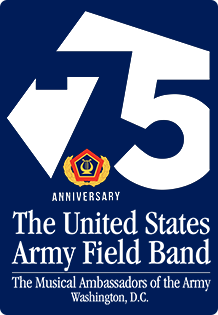